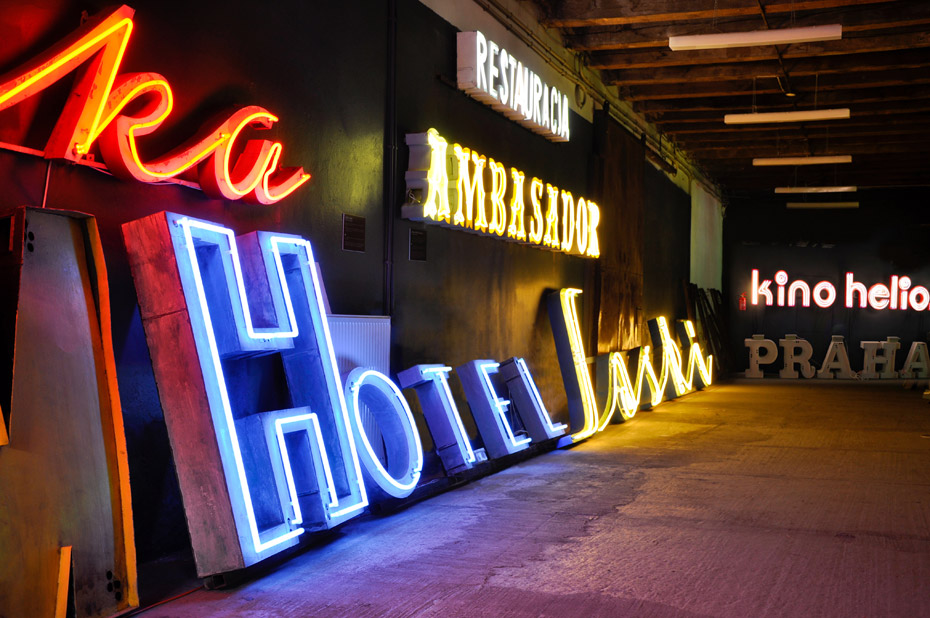 “Neon signs had many important uses both culturally and socially,” explains photographer and co-founder of Warsaw’s Neon Muzeum, Ilona Karwinska. “They became symbols, economically, of success, advertising and satisfying the growing needs of consumers for a multitude of modern products. They also served as socially aspirational symbols in ‘culturally relaxed’ post-Stalinist Poland, where citizens could expect a lively nightlife in the plethora of cafes, restaurants, dancing clubs, theatres and cocktail bars. Eventually,” adds Ilona, “these signs became ‘signposts’, recognisable landmarks, from which to navigate the growing urban landscape – and in turn were embraced by the public as an important part of Poland’s cultural fabric.”

Based in London but born in a small town just outside Warsaw, Ilona Karwinska has been documenting Cold War-era Polish neon signs since 2005, culminating in the opening – alongside her partner, graphic designer David Hill – of the Neon Muzeum last year.

After Stalin’s death, the ‘Khrushchev Thaw’ of the 1950s and 60s ushered in a new era of Polish creative expression, none more vivid than neonisation – free in design, shape, and colour, and significantly influencing other forms of advertising like poster design and typography.

In the words of Professor David Crowley of London’s Royal Academy of Art, these neon

“fluid threads of light brought a kind of nocturnal magic to the city.” Many were the product of the state-run Reklama company (meaning ‘Advertising’ in Polish), who employed or commissioned Poland’s finest architects and graphic designers to produce the signs through the 1950s, 1960s and 1970s.

“Many of these artists – Witold Janowksi, Janusz Rapnicki and Jan Mucharski – came from the famous Polish School of Poster Design,” confirms Ilona. “With deeper research of recently uncovered archives, we are now connecting many more well-known designers and architects with the neonisation program,” she says.

The first of its kind in Poland, it the Neon Muzeum exhibits an extensive archive of Ilona’s photographs alongside original blueprints of the signs. Indeed, Karwinska has been credited with starting a new “school of neon,” such has been the popularity of the Neon Muzeum: “The reaction to our initiative and to Neon Muzeum has been overwhelmingly positive and supportive,” confirms Ilona. “We recently participated in the European Museum Night (where museums across Europe open their doors to the public for one evening) and had over 16,000 visitors in a single night, breaking records in Warsaw.

“I saw them as fascinating and photogenic; decaying objects that in some way reflected the transience of human life”

Sadly, although popular, the world that Karwinska and the Neon Muzeum champions is one that’s fast disappearing from Poland’s rapidly changing cityscapes. “David first drew my attention to these iconic neon symbols,” Ilona recounts. “His interest came from a deeper creative fascination with neon, typography and architecture. I saw them as fascinating and photogenic; decaying objects that in some way reflected the transience of human life and what we leave behind. The first neon to be photographed was meant to be BERLIN. However, when I arrived to take the photograph it had been removed. I made some enquiries and fortunately saved the sign from destruction.”

Consquently, that experience prompted the pair to ensure that the Neon Muzeum would also dedicate itself to the preservation of original signs in addition to displaying them, something that Professor Crowley sees as preserving “a unique and significant moment in Poland’s history.”

Ilona recalls how BERLIN “really started the whole collecting process. So many signs were being removed and destroyed it was hard to intervene and save every one. Eventually when we had enough to consider a permanent collection.”

The conservation and preservation of neon signs is not for the faint-hearted, as Ilona explains: “the cost is enormous. Fortunately we’ve had a number of generous sponsors and donations over the years that have allowed us to renovate a large number of neons in our collection. We use specialists to repair the old neons, one such company being Reklama and was the company that originally made the signs back in the 1950s, 60s and 70s.”

As it’s such an enterprise to find and restore the old neons, touching human stories attached to their salvaging have been numerous. “Yes, there have been some quite serendipitous moments over the years,” says Ilona, “but I think my favourite was when we gave the BERLIN neon back to Reklama to renovate and discovered they’d made the sign originally; the same – though now much older – men involved in its creation in 1974 were amazed to see it back, and could work on its restoration.”