DORODESIGN LIKES: At Fogo Island, just off the coast of Terranova in Canada

Fogo Island is just off the coast of Terranova in Canada and is home to a humble independent fishing community of people that for centuries has survived the rigid conditions of wind and sea. The Islanders of Fogo live in this wild environment on the North Atlantic Ocean. They are humble and kind and in recent years have seen their traditional life-style threatened by events beyond their control. Fogo Island is a place of subtle and constant beauty, where the passing of time has not been affected by the circle of life. Its inhabitants are inextricably linked to their homeland. It has a rich culture and is full of resources; the community is close-knit and the memories of their ancestors continue to live among them, passed down from generation to generation. The Shorefast Foundation is working with the people of Fogo Island to identify ways to safeguard this special place and this unusual culture: “We decided to look for new directions through the arts. We wanted to create structures that respected the location and would enhance the surroundings that is so fragile and so wild. We wanted to create amenities that would touch our imagination and contribute to maintaining a link between our past and our future”. 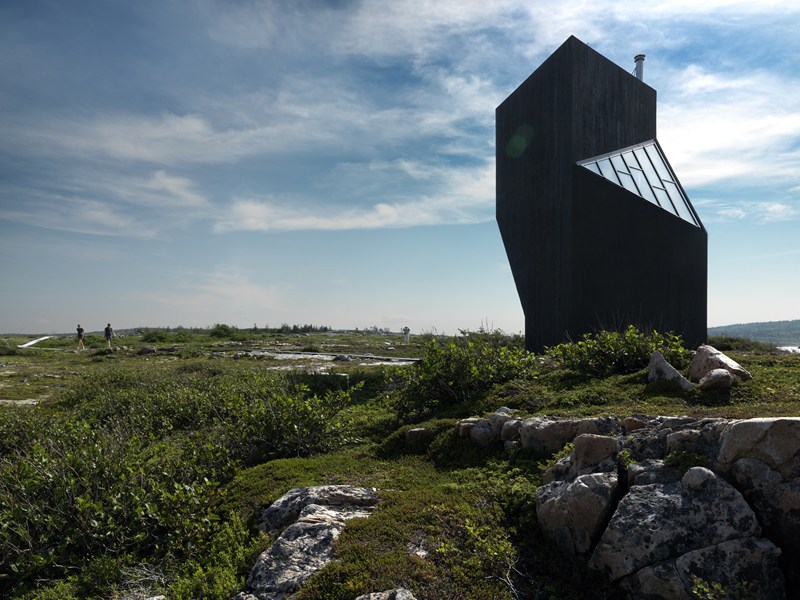 Tower Studio occupies a magnificent position on a stretch of the rocky coastline at Shoal Bay, Fogo Island, Terranova, Canada. The sculptural silhouette of the studio leans forwards and backwards, and twists upwards. When they observe this black, windowless tower, the majority of the island’s visitors are puzzled and ask the question ‘What is that?” The local people know exactly what it is – it was designed by the Fogo Island Arts Corporation – and is an art studio that was opened in June 2011. For the inauguration, a huge bonfire was lit, there was a firework display with the background accompaniment of the whales’ songs. 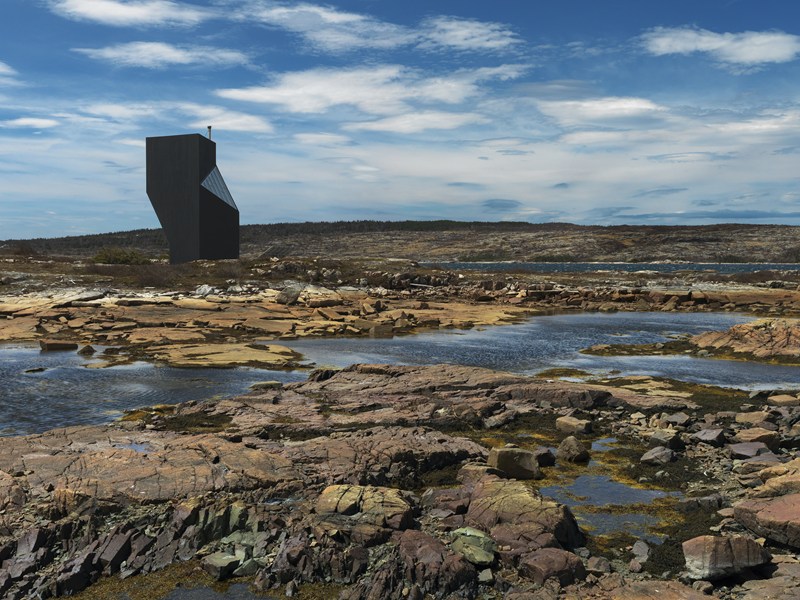 The Tower Studio teeters on a stretch of rocky coastline and can only be reached on foot from the nearby village as there are no access roads. Visitors have to walk along the water’s edge or cross a narrow wooden walkway consisting of panels floating on moorland rich with arctic blackberries, locally known as bakeapples or cloudberries.
From a distance, the wooden walkway looks like a belt or a bridle that connects the Tower Studio to a stretch of highway. The walkway was used to transport the construction material to the building site without disturbing the delicate eco-system of the moorland and particularly to avoid damaging the lichens that grow on the rocks. 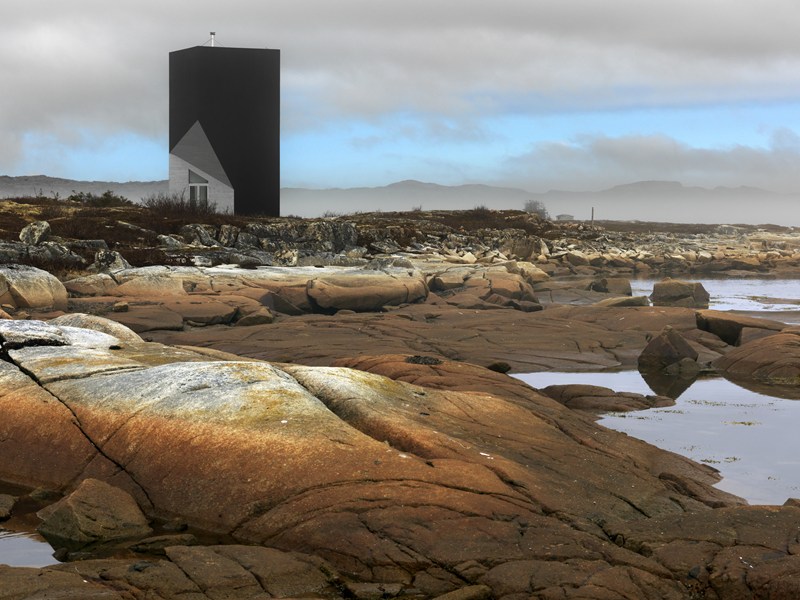 The walkway bears witness to the holistic thought-train that is an integral part of the Shorefast Foundation mentality; it connects the points of economic, cultural and ecological sustainability at macro and micro levels.
Now that it is no longer needed, the walkway will probably disappear, to minimize the impact Tower Studio could have on the surrounding landscape.
On approaching the studio, the south-facing entrance can be seen to be tilted backwards at an angle of 30°. The wall has a triangular section that is tilted forwards to protect the double glass doors below, Both the ceiling and the entrance door at the corner, coated in horizontal panels of red fir, have been painted white in stark contrast to the building’s exterior coating of black slate.

There are three levels inside the Tower Studio. The entrance zone is complete with a catering corner, washrooms and a log-burning fire. There is a study on the second floor, illuminated during the day by a generous north-facing skylight. The third floor is a mezzanine and this level penetrates into the dual height volume of the study.
Apart from the geometric complexity of the interiors, the second feature that adds to the visitors’ sense of disorientation is the fact that all of the architectonic details have been eliminated with all of the vertical, horizontal and tilted surfaces, covered in smooth plywood, coated in a brilliant white paint. The only exception is a fragment of the exterior visible through the studio’s skylight. A tilted wall opposite and parallel to the skylight provides the perfect backrest for relaxing and taking in the breathtaking views. 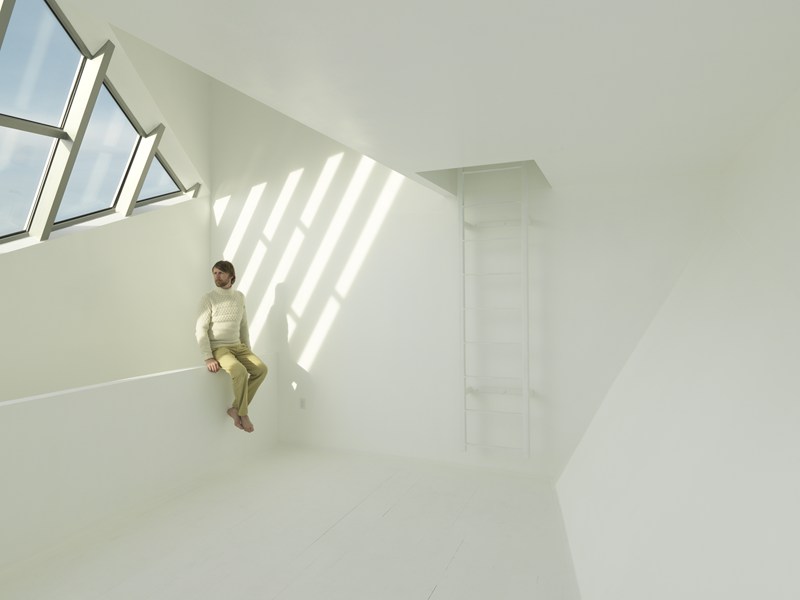 Just try and imagine the magical effect of a moonlit evening with the roar of the Atlantic Ocean and the pounding wind against the exposed surfaces of the tower. From the studio, a narrow white staircase extends beyond the mezzanine as far as the lower part of the roof. Passing through the horizontal opening, visitors reach the roof; the panoramic views of the sea and the rocks battered by the wind is spectacular. 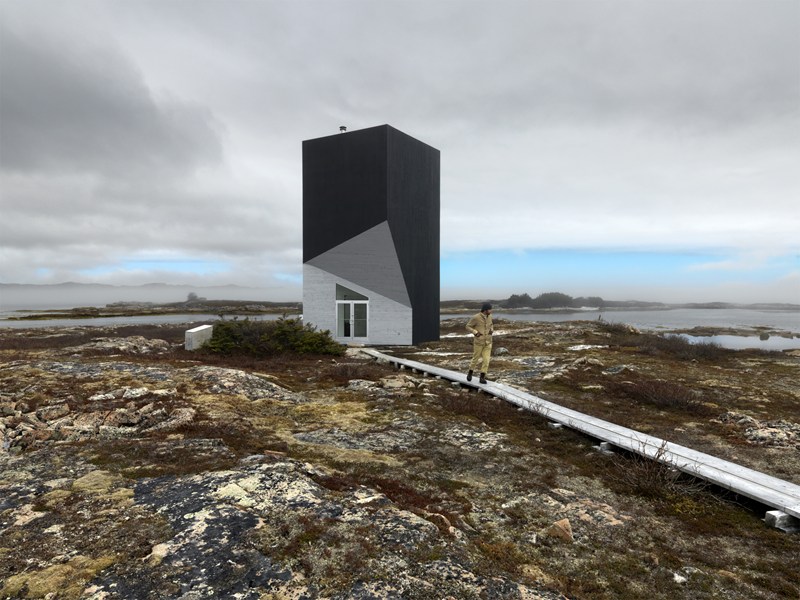