The 2014 Cadillac ELR plug-in hybrid got a lot of buzz at the Detroit Auto Show, and was awarded the Eyes on Design honor as Best Production Vehicle. It’s taken four years for the original concept car – the 2009 Converj based on the Chevrolet Volt powertrain – to make the next step forward. 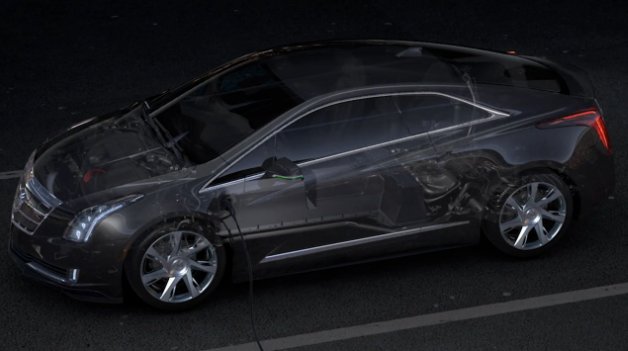 Tim Kozub, Cadillac exterior design manager, said the design team used the Converj as a sketch to create the ELR. He thinks that proportion was everything in the design – the car is low and wide, and has 20-inch wheels which are pushed to the corners. “It just plants itself so beautifully,” he says.

Performance is amped up in the ELR because it’s a Cadillac, he said. It has the looks of a hot, exotic sports car with great attention to detail. That includes headlights made with crystal cubes surrounded by chrome, all LED and very high tech. “Everybody wants this hot car, this hot image coupe, to sit in their driveway, to step out of it at a restaurant,” he says.

We’ve got more of GM’s marketing videos for the ELR, emphasizing a few themes, like animated phasing between sleek Cadillac body style and an inner skeletal frame showing off the technology.