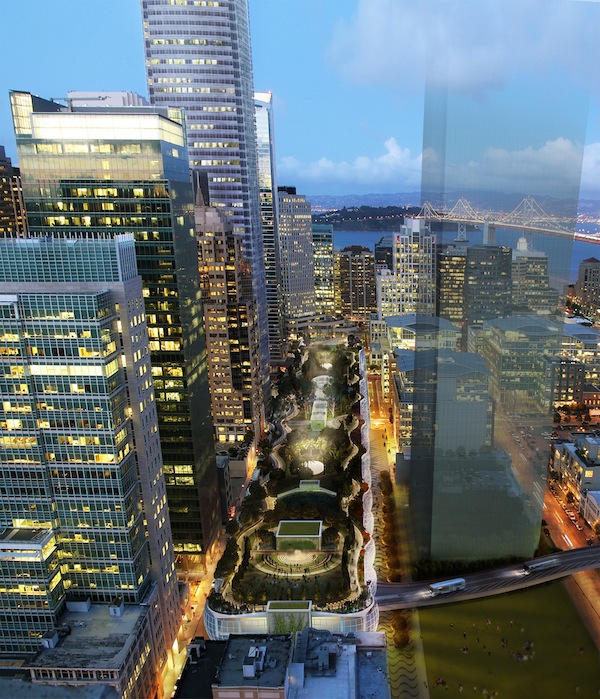 It took 30 years for an out-of-service elevated railroad track on the West Side of Manhattan to transform into the High Line. When the Transbay Transit Center opens in 2017 in San Francisco, the Pelli Clarke Pelli–designed terminal will have its own petite version of the High Line built in—no decades-long cycle of disuse and reclamation necessary. This 5.4-acre urban park, designed by PWP Landscape Architecture, will unfurl across the roof of Transbay with curving paths, vegetated hills, and a fountain whose jets will go off when buses pass below. Riders, pedestrians, and anyone who just wants to goof off in the middle of the day will find respite from the towers and tight sidewalks of the city’s business district. Needless to point out, the park will be the largest public open space in downtown San Francisco. Read more. 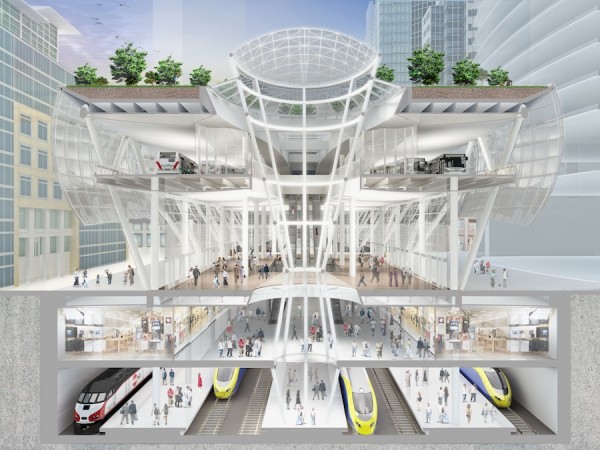 In 1985 San Francisco began requiring developers who build downtown to provide one square foot of public space for every 50 square feet of commercial space. Over the years the regulation has given rise to an informal network of more than 50 privately owned public spaces, or POPOS (check out some of our favorites here). Right now, there are more POPOS in downtown San Francisco than there are parklets in the entire city. “The POPOS in San Francisco have really been a foundation of the livability of downtown as it has grown,” Joshua Switzky of the San Francisco Planning Department said at a recent panel at the urban think tank SPUR. In the discussion, which was moderated by San Francisco Chronicle urban design critic John King, landscape architects and architecture professors from New York and San Francisco asked: Are POPOS a good deal for cities?

It turns out that these spaces don’t succeed so well at the “public” part of their acronym. Compromised by small, out-of-the-way signage, befuddling access procedures, and illegal privatization, our riches of POPOS begin to look like a surplus of POOS (that would be Privately Owed Open Spaces). “The city is giving away something in exchange for maybe not so much,” said Margaret Crawford, professor of architecture at the University of California, Berkeley, College of Environmental Design. 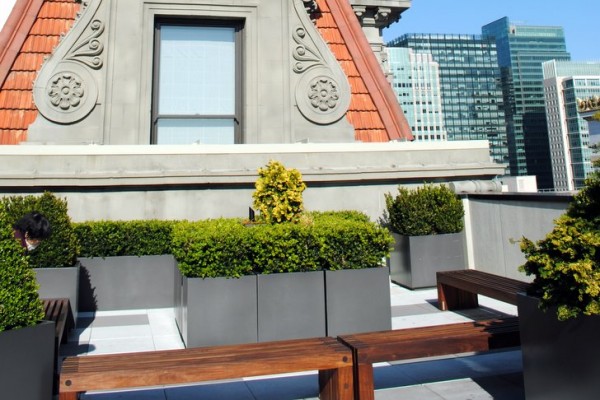 The POPOS at One Kearny Street, designed by one of the evening’s panelists, the landscape architect Marta Fry, offers an 11th-floor terrace overlooking Market Street.

“It’s an oxymoron because you’ve got private ownership and public space, and there’s an inevitable tension associated with that marriage,” said Jerold Kayden, professor of urban planning and design at the Harvard Graduate School of Design. In 2000, Kayden published a book, Privately Owned Public Space: The New York City Experience, assessing New York City’s POPS (New York parlance drops a syllable). He found that 50 percent of the 500-plus POPS did not comply with city rules, and 41 percent were just unpleasant to spend time in. In 2006 the art and design studio Rebar analyzed San Francisco’s POPOS and found that many come up short. The panelists recounted issues common to both cities, from owners who remove seating to misinformed security guards who shoo away POPOS visitors to neighboring eateries that slowly annex the public space through café creep.

“The whole issue of providing space and actually getting people to the space can be problematic,” said King, describing a trip to the terrace on the 11th floor of One Kearney Street earlier that day. “It’s a very well-designed space after you sign in, after you show your ID, after they push the button on the elevator to get you up there,” he said drily. “If you want to use the bathroom that is provided as per code, on the 11th floor there is now a sign that says you have to go back to the lobby to get the key.” 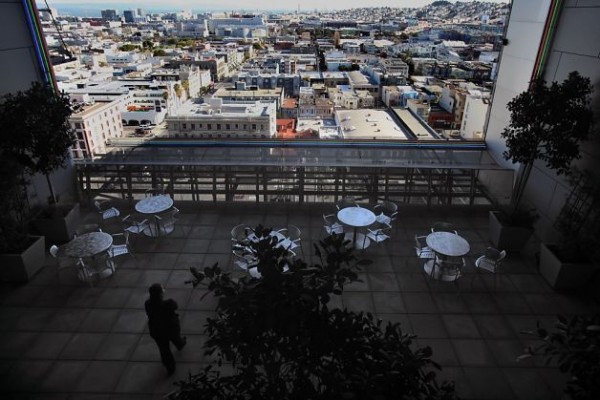 The sky garden at San Francisco’s Federal Building, designed by Morphosis. “You are going into something where you have to take your shoes off—it’s like going on an airplane,” said King. “One step short of that: you don’t have to take off your belt.” Photo: Liz Hafalia for the Chronicle

Even the best of intentions have a way of being thwarted by bureaucracy. When Thom Mayne designed the San Francisco Federal Building, he carved out a three-story sky garden with sweeping views of the city. In 2010 King took the government to task in the Chronicle for trying to close the sky garden to the public. ”Thom Mayne, who is an aggressive architect but an eternal optimist, felt that a big federal building should provide big public benefits,” said King. After some public pressure generated by the story, the sky garden reopened. 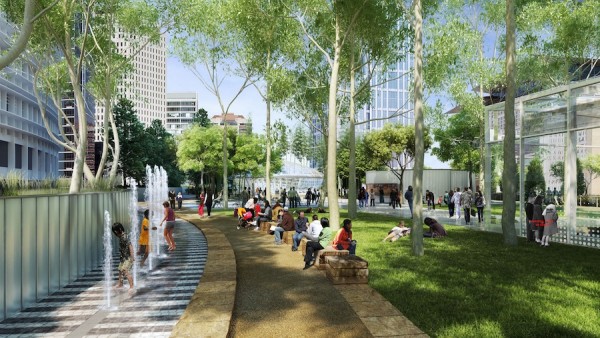 Rendering of the park planned for the roof of the Transbay Transit Center. Image courtesy of PWP Landscape Architecture/Pelli Clark Pelli Architects

As the city prepares for the new transit center and park, the planning department is working to avoid awkward POPOS snafus. The transit center plan includes several new buildings around the center itself, including Pelli Clarke Pelli’s Transit Tower, which will be the tallest skyscraper on the West Coast. To avoid relying on the transit center alone as the single access point for the multiblock park, the city will require some of the surrounding buildings to use dedicate their POPOS allotment for public park access. “They have to provide dedicated public access from some public space—the sidewalk or a plaza or through their lobby up a dedicated public elevator—to a connection to the rooftop park that would have to be open all times the park is open,” said Switzky. Whether there will be a guard there to push the button for us remains to be seen.

by Lamar Anderson via Architizer

DOROLIFESTYLE “a r i a” Il vuoto che arreda: Mostra VIAFARINI a Milano