There are moments when we become especially aware of architecture and the way that it informs our responses to the world around us. Encountering built environments that consciously attempt to affect a sense of the spectacular or sacred are examples of such moments. One building type that performs this function in an emphatic manner is the museum, that cathedral of culture that serves to reflect us back to ourselves through the presentation of material artefacts, imbued with symbolic meaning. 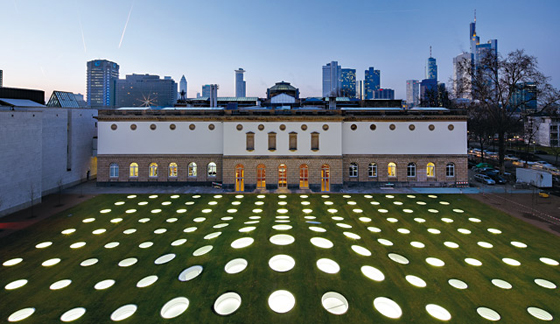 But structural form is just one way that space can be formed. Light, too, helps shape our spatial impressions, creating depth and contrast. And it takes on an additional significance in the context of the museum, where the way we perceive objects – read them, analyse them, form emotional responses to them – is determined to such a large extent by the way in which they are subject to illumination.

Light plays a major role in a newly completed project by international lighting manufacturers Zumtobel for the Städel Museum in Frankfurt, Germany, where architects schneider+schumacher have designed an impressive subterranean extension to the internationally renowned institution. An 8.2-metre-high hall has been created under the existing building’s garden providing 3,000 square metres of additional exhibition space. So how exactly do you illuminate an underground space where the way the lighting works is absolutely critical, not only from a visitor’s perspective, but also in terms of conversation of the artworks. 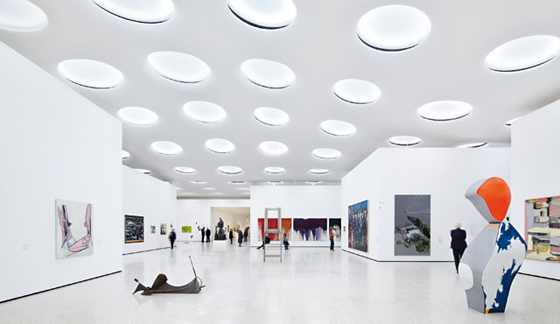 From the outset, the project was truly collaborative in nature. Zumtobel and the architects were joined by lighting designers LichtKunstLicht to deliver a creatively led lighting solution. Although the new gallery rooms are below ground level, the architects decided to open up the whole space, uniting the subterranean with the aerial by puncturing the slightly domed ceiling with a series of almost 200 circular skylights. Similar to architect IM Pei’s glass pyramids at the Louvre in Paris, which function as, among other things, lightwells in addition to architectural interventions in museum’s courtyard landscape, the glazed ceiling perforations at the Städel Museum, seen from above ground, form a fascinating visual field, a new, strongly graphic, garden topography.

The skylights range in size from 1.5 to 2.5 metres in diameter and do what skylights are wont to do. They allow natural daylight to penetrate the underground hall. But they also possess an added value, acting as anchors for rings of carefully installed, bespoke LED elements, produced especially for the project by Zumtobel in collaboration with the lighting designers and architects. Should the sky be overcast during the day or when evening falls, the LEDs, made up of both warm (2700K) and cool white (5000K) elements, ensure that light levels remain uniform – thanks to Zumtobel’s Luxmate professional lighting controls – so that the gallery space continues to function perfectly for displaying the art and other artefacts that it houses.

Above ground, the skylights form a striking, highly graphic garden landscape, through which visitors can walk

“By combining intelligent control with state-of-the-art LED technology,” explains Reinhardt Wurzer, Head of International Projects at Zumtobel, “we were able to develop an absolutely unique and flexible lighting concept that allows to provide the best light at any time for unlimited enjoyment of art.” There’s unlimited variability, too, as illuminance levels can be individually set for each skylight as required. Furthermore, custom-built Arcos LED projection spotlights can be plugged into sockets in the skylights in order to emphasise individual objects or picking out particular wall surfaces.

But there’s another significant added value to the manufacturer’s tailored lighting solution for the Frankfurt project in terms of its performance. While light in a museum context aids legibility of the exhibits, enhances visitors’ interaction with a gallery’s displayed contents, it can, at the same time, actively damage that which it illuminates. Certain materials, such as paper, can be highly sensitive to light, a concern which Zumtobel it committed to addressing. So dedicated is the company to the issue of conversation that it has commissioned and published research into the relative effects of lighting on art works. 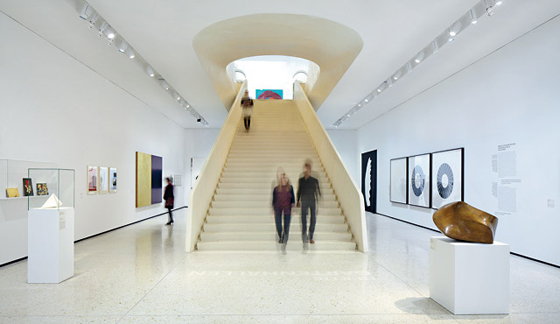 A key factor for Zumtobel in delivering successful lighting solutions for museum contexts is one of conservation. The company has itself commissoned research into the effects of different lighting sources on works of art

Working with the Lighting Engineering Department of Darmstadt’s University of Technology, Zumtobel has taken as its most recent case study Pablo Picasso’s ‘Harlequin’ drawing (medium: pencil on paper) of 1916, examining how the quality of different light sources affected the work of act within a set of predefined evaluation parameters. Two spotlights were compared, one using traditional tungsten halogen lamps, the other LED. Both were directed at the drawing for a specific amount of time. The assessment criteria ranged from light colour and illuminance to homogeneity and damage potential.

The detail of the research report can be read by clicking on link at the start of this article, but, in brief, the main findings are unambiguous: the use of the latest technology in LED lighting brings with it a reduction in UV and IR radiation; colour temperature is maintained during dimming; energy efficiency is increased; and the risk of damage to works of art is reduced.

When it comes to professional lighting within the context of museum architecture, Zumtobel’s double-whammy project for the Städel – delivering as it does a highly considered and individual lighting presence to client’s new underground galleries, yet one that is conversation-conscious – functions as an exemplary reference project. A beacon, if you will. (Pun intended, of course.)