The tiny ocean front park that nestles at the foot of the flashy W Hotel on Miami’s South Beach has been a site for spectacle throughout Miami Art Basel’s eleven year history.  The New York Dolls played on the adjacent beach in 2005. In 2010, Fyodor Pavlov Andreevich created a multi-storied installation complete with aluminium gutters that ran with vodka. And this year, for the duration of the fair, an ovoid structure of curving plywood slats turned into a glowing superscale lantern at around 6pm each night as the sun went down. 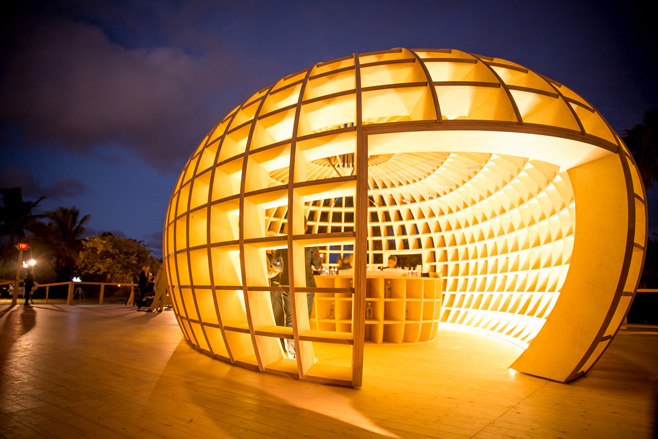 The piece, created by Cuban artist group Los Carpinteros, in collaboration with the Absolut Art Bureau, housed an eliptical bar, and is, according to Dagoberto Rodriguez (one of the two Carpinteros) ‘the most abstract piece we have ever made’.

For anyone looking at this most real of pavillions – a perfectly assembled masterpiece of German engineering, which arrived flat-packed in Miami just a few days before its opening on 5 December – the idea of abstraction could be confusing. But Rodriguez is referring to a whole body of work created with fellow Carpintero Marco Castillo (and until 2003 Alexandre Arrechea) in which they take existing structures and twist them to convey conceptual ideas. A scaled down lighthouse lying on its side, for example, (Felled Lighthouse, 2006) which is in the collection of Tate Modern, talks about the disempowered country they call home; a caravan is rendered immovable when constructed in bricks. 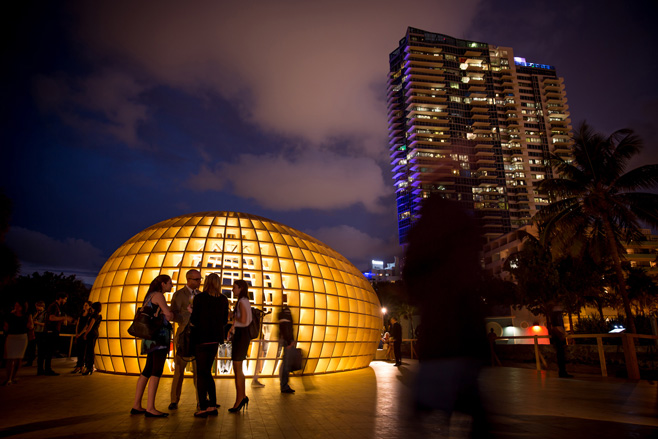 The piece in Miami is called The Güiro, after a percussion instrument that’s popular in Cuba (it’s a local word for a party in Havana, too). ‘The project really goes back to 2010, when we became interested in panopticon prisons and that idea of control,’ explained Dagoberto Rodriguez as we explored the first of three special cocktails being served in the bar throughout the fair – this one is like a pisco sour, but made with vodka and sprinkled with pomegranate seeds. ‘First we took the panopticon form but used it to make a library, where the spaces that would have held people held books instead,’ says Rodriguez. A person standing at its centre would have equal access to every book – a commentary on the power of democracy.

When Absolut approached the artists they reconfigured the idea as a gesamtkunstwerk, where a fully functioning bar could be placed in a unique architectural structure, the outside world appearing like film stills through each aperture from the inside, and the inside activity looking like a series of little artworks from the outside.

Poignantly, Marco Castillo wasn’t able to attend the art fair and see the piece: his visa didn’t arrive in time. Los Carpinteros’ work is firmly grounded in their status as Cubans, and their experience of growing up after the Cuban revolution. Castillo’s non-appearance is another part of this on-going narrative. 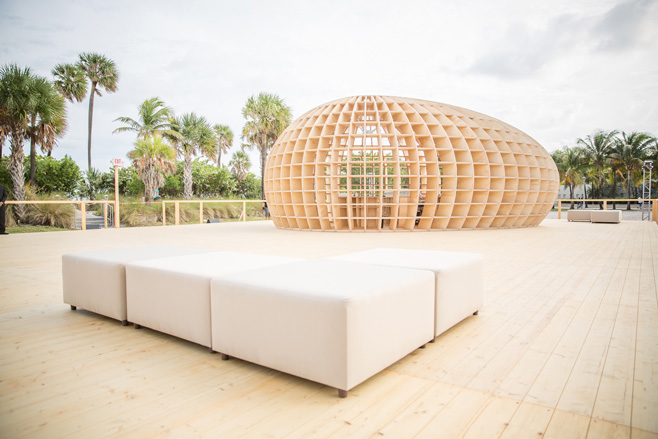 The Guiro is named after a percussion instrument popular in Cuba (it’s a local word for a party in Havana, too). Photography: Roberto Chamorro. Courtesy: Los Carpinteros; Sean Kelly, New York/Absolut Art Bureau