Serving Up a Cultural Experience for a Multi-Ethnic World

In some respects ‘typical’ and in some others not, Piatti Tipici are a small – but very creative – contribution to people’s growing appetite to communicate with each other in a complex social environment. Food becomes the medium, since ‘tasting somebody’s food is an easy way to understand their culture’, says Marta Lavinia Carboni, Piatti Tipici’s designer. Together with the photographer Ambra Zeni, they transformed six people’s narratives about their favourite national dish into handmade plates, bringing together ceramics crafts with digital technology to create a fresh aesthetic.

Where did the initial idea of Piatti Tipici come from?
Marta Lavinia Carboni: The idea came as a result of our interest in the social aspect of a project. Of course we also wanted to create a beautiful object – and a nice photo –  but what interested us the most was that this object could signify beyond itself and represent a fragment of reality. Personally, I always loved doing research and then uniting different – and sometimes distant – points to form a transversal approach to the project.

Ambra Zeni: For almost one year I was thinking of ways to depict the culinary diversity taking place nowadays in Italy thanks to the immigrants. I had already done a project on the relationship between food and society, but taking pictures didn’t feel enough anymore. I shared the idea with Marta, certain that her view as a designer was the right ingredient to develop the idea. After days and days of brainstorming, Piatti Tipici came up. 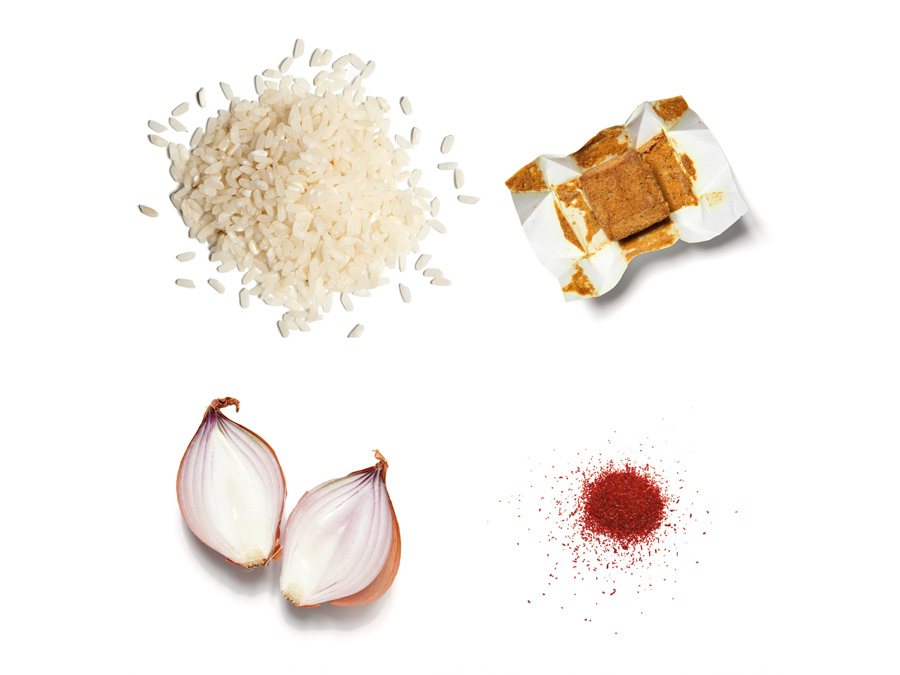 Ingredient for the Italian dish 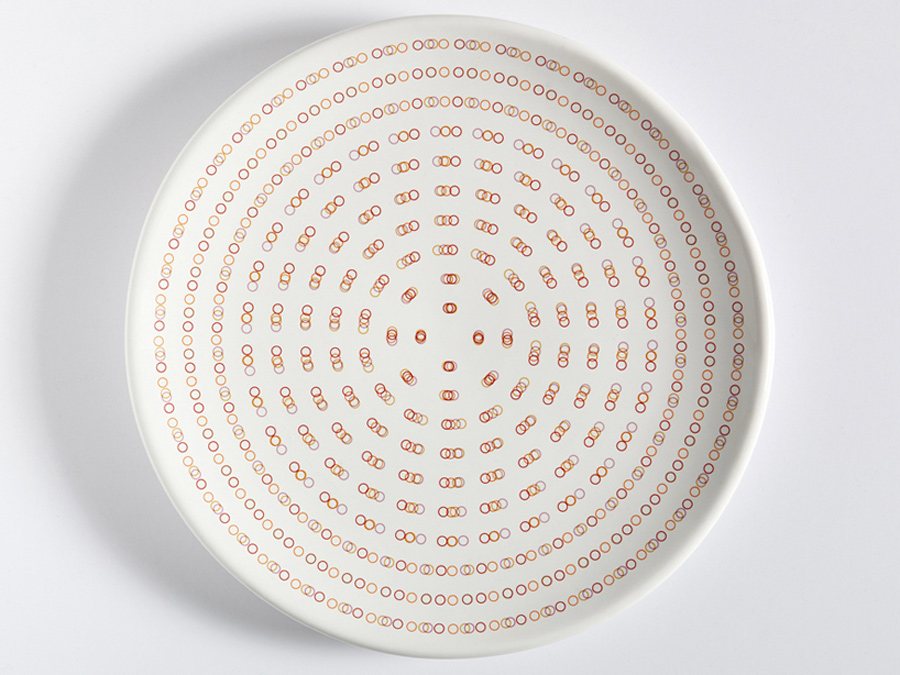 You used a gastronomy term to name your project. Can you explain the link?
M.L.C.: I never liked giving weird names to design projects… Abbreviations or numbers, for example, do not narrate the project. On the contrary, Piatti Tipicisuited perfectly what we did: a research in patterns and photos of different nations’ typical dishes. And then, I liked using a name associated with popular culture, usually found in menus of restaurants that have survived from the past, with square-folded napkins and old people playing cards, but – to many people’s surprise – with a very graceful selection of dishes.

How did you work?
M.L.C.: We interviewed six people of different ethnicities. We asked them which typical dish of their country they can prepare with the ingredients available in Milan and how they prepare it. At that point, Ambra took photos of the ingredients, while I tried to define wider ranges of colours in which I could place the different reds, pinks, yellows, etc. We plan to present more plates in the Milan Salone, so we will interview more people. 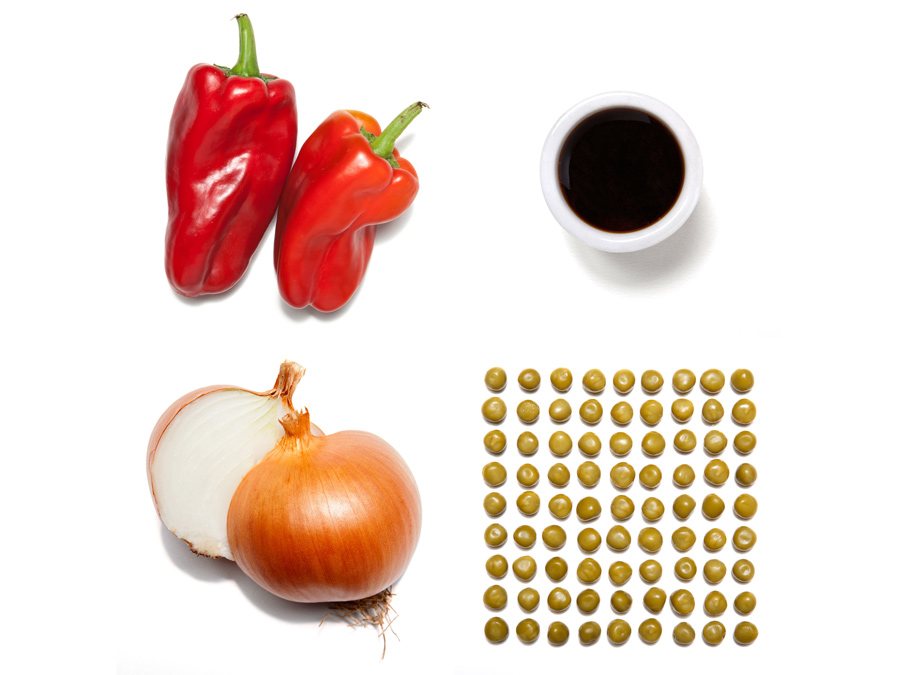 Ingredient for the Chinese dish 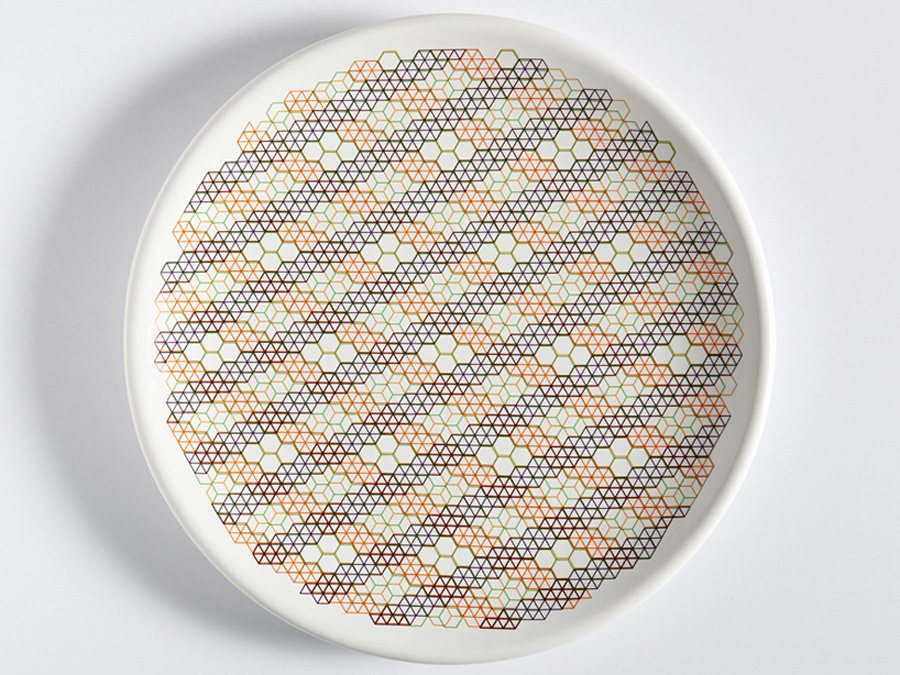 How did the people you interviewed react?
M.L.C.:They were all very willing to talk about their eating habits. And all of them had a dish that made them feel ‘at home’!

How did you match food with colours?
M.L.C.: I grouped the food ingredients in eight different chromatic areas. For example, carrots and vegetable broth are not of the same colour, but they can be placed in the chromatic area of orange. After a long process of selection and calibration of the final colour, 11 different colour combinations were created.

How do the patterns connect to the dishes?
M.L.C.: Some of them represent the preparation of a dish and some others the final result. For example, in the case of the Italian dish – risotto with saffron – the pattern describes the preparation: the small circles represent the grains of rice stirred in circular movements together with broth and saffron.

If you showed the plates to people of the selected ethnicities, do you think they would pick up the one based on their own typical dish?
I hope not! I hope that they would opt for diversity! 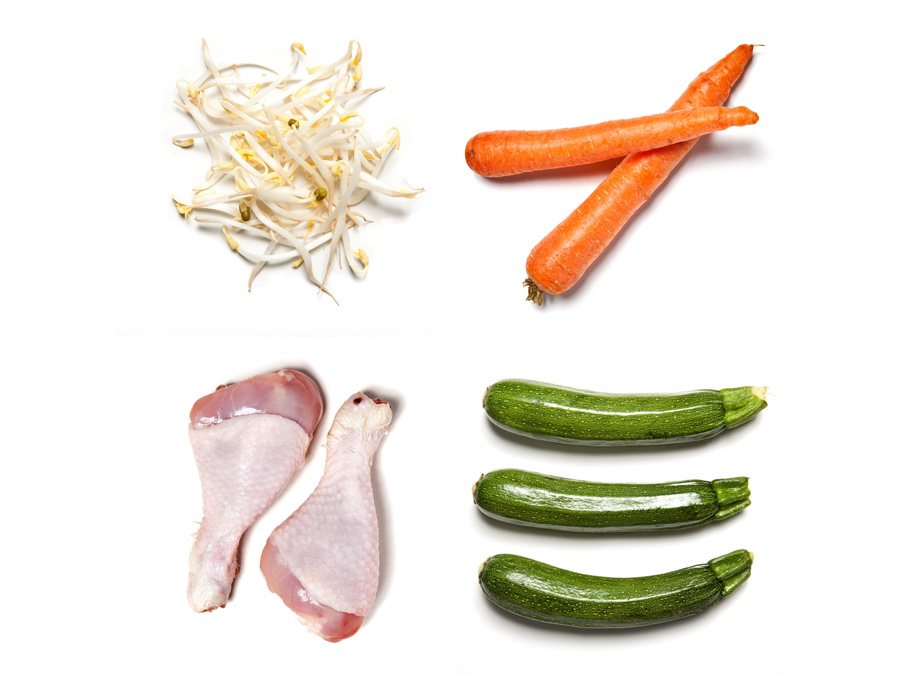 Ingredient for the Filippino dish 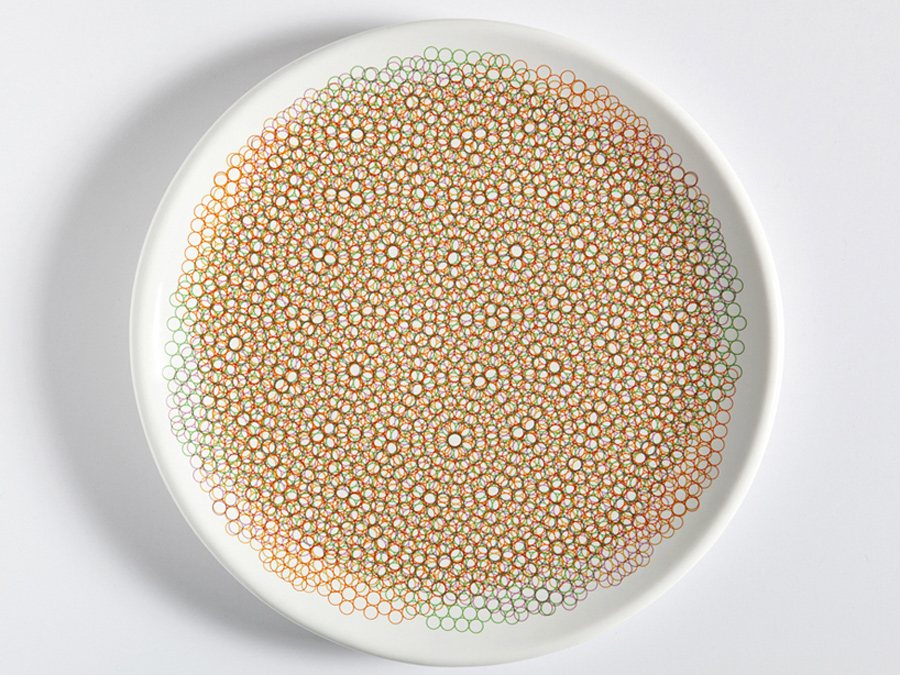 Both elements of tradition and digital technology are strongly visible in Piatti Tipici. Did you aim at this combination?
I wanted to contrast handmade and technology. Therefore, I looked for a ceramics laboratory that would create the plates by hand. Every plate is different from one another and went through three stage. First, it was removed from the mould and my signature was stamped on its back, then it was enamelled and, at the end, the print was applied manually on them. After every stage the plates were baked in the oven. The final result is a handmade product that can be used daily and washed in the dishwasher. To smoothen the technological connotations of the plates and strengthen their artisanal look, I used a very white and shiny enamel.

What did you enjoy more?
M.L.C.: Working in a traditional ceramics laboratory! Measuring the time you need to create a plate, understanding each stage separately and uniting artisanal-ity with computer-generated prints was a process I really enjoyed. I loved the moment I applied the prints on the plates!

A.Z.: I always find it very difficult to meet the curiosity about society’s trends and habits through my job. With Piatti Tipici, I found an unusual way to express such a habit through images. But most importantly, a new element that my previous projects lacked was added: the production of a real object that expresses the initial idea. 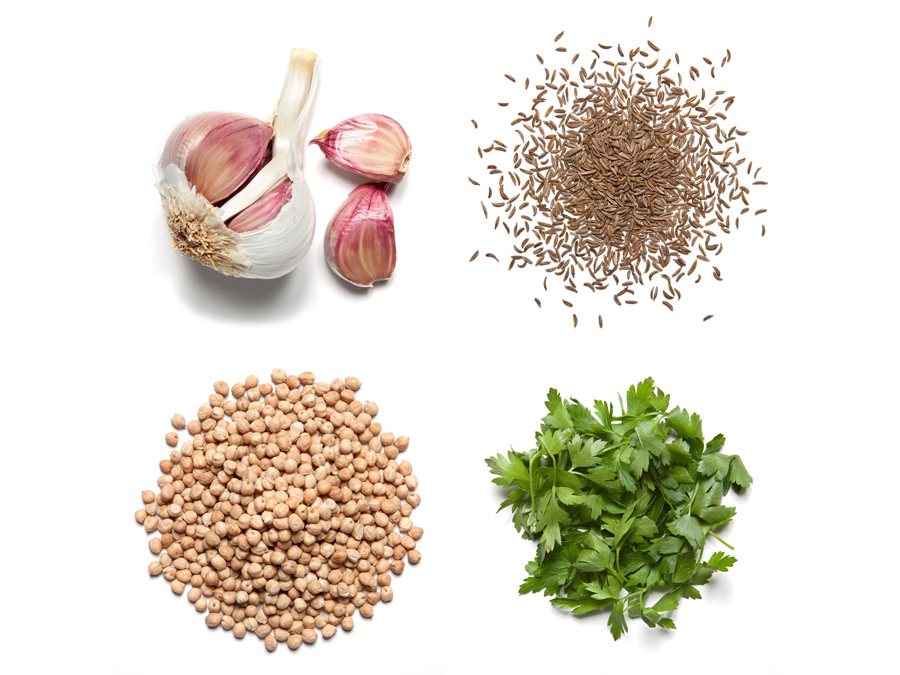 Ingredient for the Egyptian dish 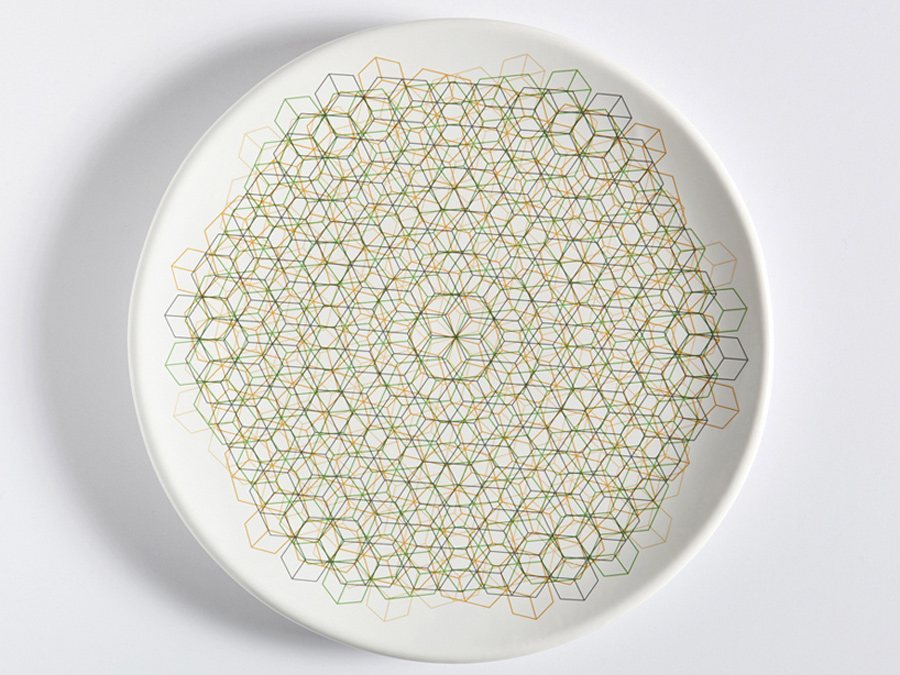