One of my favorite bike companies, beautiful bike. 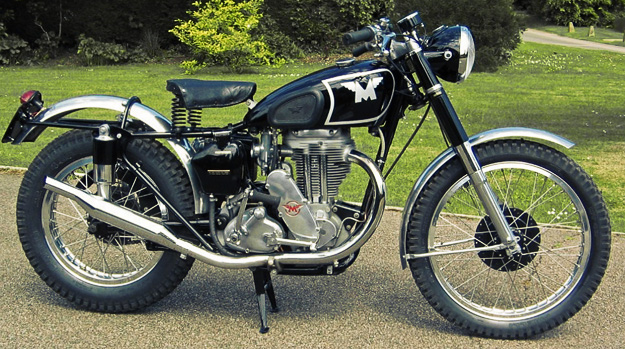 This bike is almost sixty years old, yet it’s just as desirable today as it was in 1950. For starters, it’s one of the original ’scramblers’ and it’s as rare as hen’s teeth. And the back end, exhaust system and tank graphics would be perfectly at home on a contemporary Tokyo custom. The Matchless G80 series might be a simple 500cc British pushrod thumper, but it’s achieved remarkable status in the vintage motorcycle world—and this ‘CS’ scrambler was the ultimate G80 derivative. The CS (Competition Suspension) model was highly regarded as an off-road competition bike, and was still active in events worldwide until the late 1960s. It’s not known how many genuine competition bikes still survive; because the CS had such great lines, quite a few standard G80s have been converted to ‘CS’ spec. This particular CS is the real thing, however. It’s owned by John Dennehy, a Brit living in New Zealand, and was restored in the UK by the collector Dr Richard Johns. The frame number is 2755C, which confirms that it was a very early G80 competition frame manufactured at the south London Matchless factory in 1950. Sometimes the original is the best. [Thanks to Glenn Edley of car137 for the tip. There’s a video of an immaculate G80CS fired up here: check the valves hammering away.]

DORO Likes
Read More
Manage Cookie Consent
To provide the best experiences, we use technologies like cookies to store and/or access device information. Consenting to these technologies will allow us to process data such as browsing behaviour or unique IDs on this site. Not consenting or withdrawing consent, may adversely affect certain features and functions.
Manage options Manage services Manage vendors Read more about these purposes
View preferences
{title} {title} {title}