Im going to take a minute to thank maybe my favorite blog, Bike EXIF.  As well as as a hat tip to a great bike, a great example of good clean Italian design.  If you look at it, poche tarantelle, pure, clean, honest.  Everything we value here in our studio. 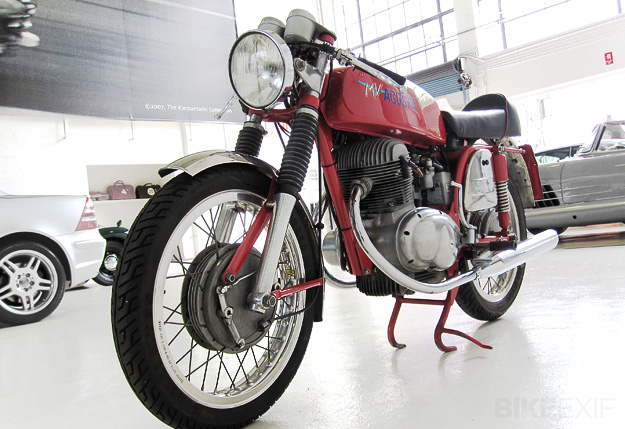 Tucked away under the arches of the Harbour Bridge in Sydney, Australia, is the Classic Throttle Shop. This amazing vintage car emporium is also home to CTS Auctions, and on Saturday 5 December a very rare motorcycle will be going under the hammer. It’s a gorgeous 1972 MV Agusta that never officially entered production, being a five-speed 250S with electronic ignition. According to the catalogue, this bike was based on the 250B twin produced between 1967 and 1971. The history is unique: “First imported to London on January 30, 1973 by Gus Kuhn Motorcycles, MV factory production records indicate the bike was completed on October 27, 1972. Dated by the MV Owner’s Club, it was built some 17 months after 250cc production officially ceased.” The guide price is AU$21—$26,000 (US$19,300—$23,900), which is pretty good for a one-of-a-kind from the prestigious Varese maker. [Thanks to Richard Fowler of Motorsport Retro for the tip. Image by Karin Johnston of Linzdesign.]