Not as bad as I thought it would be, but it dosent drive me crazy like past BMWs.

BMW has just revealed the first official details of its all-new 2011 BMW 5 Series. With the longest wheelbase in the segment — the sedan shares its architecture with the 7 Series — the new 5 Series boasts a host of BMW’s latest efficiency, safety, and performance technology.

Two direct-injected powertrains are available at launch for the U.S. The first, in the 550i, is a twin-turbo “reverse-flow” V-8, which makes 400-hp. And while the previous 535i used a twin-turbo inline-six, the new generation employs a single-turbocharger. Output, at 300-hp and 300 lb-ft of torque, hasn’t changed, but the setup allows BMW to place the snail closer to the catalytic converter, which makes for quicker light-off. Both engines are available with a six-speed manual, eight-speed automatic, or an eight-speed “Sport Automatic”. A naturally aspirated, 240-hp 528i will become available later.

In the name of efficiency, or in this case, EfficentDynamics, the 5 Series comes with brakes that recover energy, electric power steering, a shift indicator, active cooling air flaps, and accessory drives that operate on demand. BMW has also used lightweight materials throughout the 5 Series’ construction: the doors, hood, fenders, and suspension assemblies are aluminum.

Equipped with the Sport Package, the 5 Series comes with Adaptive Drive, a feature that combines dynamics control, damper control, and roll stabilization. BMW’s active steering system, which adjusts the steering ratio based on speed, is optional. The latest driver aids include parking assist top-view cameras, and a frontal collision warning system, which will automatically apply the brakes when optioned with active cruise control. Also available are Blind Spot Warning, Lane Departure Warning, a heads-up display, and night vision that can detect pedestrians.

Both the 5 and 7 Series roll out of BMW’s Dingolfing plant in Bavaria, Germany. The new 5 Series is set to hit U.S. showrooms in June of 2010. 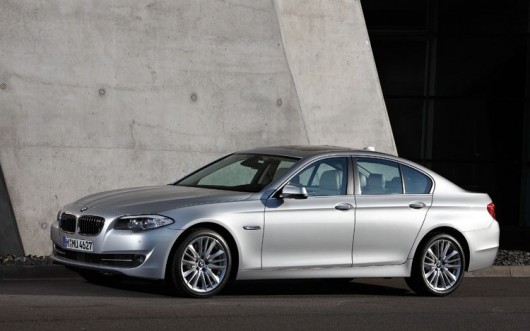 Design DORO Likes Transportation
Read More
Manage Cookie Consent
To provide the best experiences, we use technologies like cookies to store and/or access device information. Consenting to these technologies will allow us to process data such as browsing behaviour or unique IDs on this site. Not consenting or withdrawing consent, may adversely affect certain features and functions.
Manage options Manage services Manage vendors Read more about these purposes
View preferences
{title} {title} {title}